Well, we all know that all good things come to an end… but they also get hitched up to a tow truck and move down the highway to their new home! And that’s what happened with Tiny!

The official moving day went swimmingly. The winds were low, which is always a bonus when trying to move a home down the highway. Tiny was hitched up to a tow truck, hired for his experience in towing mobile homes.

The first challenge was getting Tiny out of the driveway, past some trees and under some power lines. But, it ended up clearing everything with no problem. Just a short drive up the road, and onto the highway, and Tiny was flying.

On the highway, we had to make a detour up and over a bridge, because the tow truck driver knew it was one of the lowest bridges in Nova Scotia, and it was likely Tiny would not have fit! Thank goodness for hiring a professional, or the results of that bridge meeting could have been disastrous!

Tiny did wonderfully on the highway. She rode smoothly, with little movement. She even got weighed along the journey. Matt was nervous about how everything would add up, given the trailer was only rated for 18,000 lbs — but, she came in at 14,300, which was a relief to all.

The last hurdle was getting Tiny up a fairly steep driveway and into her new home, but with some skilled manoeuvring, she made it and got settled right away. And as an added bonus, when we opened the doors, everything was still in tact and nothing had bounced around. Whew!

It was sad to have Tiny leave the driveway and the family, but so lovely to see her in her new home. 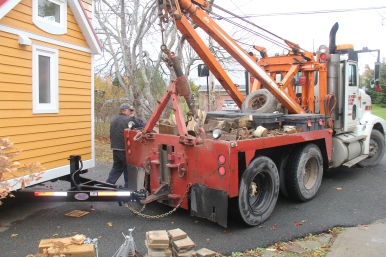 Getting Tiny ready to go on her maiden voyage

Here we go! Cleared the power lines and tree no problem.

On the road at last!

Looking good on the road

No issues with a professional towing company pulling Tiny

Looks really close but there was lots of room 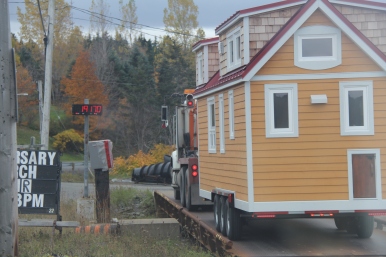 On the scales. When we subtract the truck weight it came in at 14300 lbs. 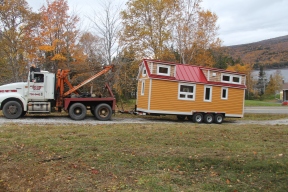 Coming up the driveway 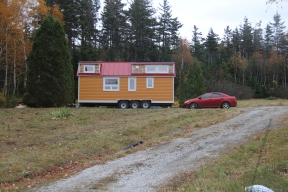 In place for the winter